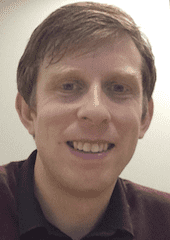 Cheap alcohol and its association with harmful drinking have been at the centre of UK alcohol policy debate for almost a decade. Public health advocates have presented minimum unit pricing as a solution, but legal wrangles, political U-turns and the fine detail of devolution mean that the policy remains unimplemented in any UK country.

With their first choice policy on hold and a budget on the horizon, the Alcohol Health Alliance has, instead, turned its attention to taxation. The focus is on strong cider and the UK’s quirky system of alcohol duties which levies a uniquely low tax rate on some high strength ciders. This means that products such as Frosty Jack’s can be sold at budget prices. Indeed, you can help yourself to three litres of the stuff (equivalent to 24 shots of vodka or 22.5 units) from Iceland today for £3.50. These high strength, low cost ‘white ciders’ are popular with those whose drinking has landed them in hospital liver wards and have attracted recent attention after a 16-year-old girl died in her sleep, reportedly due to drinking half of a three litre bottle of Frosty Jack’s.

Given all this, the Alcohol Health Alliance are calling for cider taxes to be reformed to ensure higher taxes are levied on the most harmful products. At this week’s Prime Minister’s Questions, Labour MP Mary Glindon raised the case of the 16-year-old girl and asked Theresa May whether she would act to prevent further harm. The Prime Minister politely declined and pointed out that strong ciders and beers are already subject to a higher tax rate and that the Cameron Government had addressed cheap drink by banning the sale of alcohol for less than the cost of the duty and VAT payable.

However, the PM’s claims miss crucial points. While it is true that ciders and beers above 7.5% ABV attract a significantly higher tax rate, the peculiarities of the UK alcohol duty system mean that ciders which are exactly 7.5% ABV, such as Frosty Jack’s, receive a unique market advantage. There are two parts to this:

Put all this together and you get the table below:

So the total duty paid on beer increases with strength and leaps up for products above 7.5% ABV. For cider, the total duty is lower to begin with, does not increase with strength and, crucially, the duty per unit goes down as the strength goes up. In other words, cider producers suffer no financial penalty for increasing the strength of their product to attract those motivated to maximise their alcohol intake.

By pointing to the current high-strength duty band and ignoring the rest of the system, Theresa May neglects the basic principle that similarly harmful products should be taxed at similar rates. From a public health perspective, the Alcohol Health Alliance are correct in arguing that a more sensible approach would be to introduce additional duty bands for cider. The details are up for discussion, but this might seek to close the tax gap between stronger beers and ciders. Although the EU limits the scope for action, the Government could still, for example, ensure that ciders between 5% and 7.5% ABV attract higher duty rates than those between 3.5% and 5.0% ABV and that these rates are brought closer to those levied on beer of equivalent strength.

But what about the ban on selling alcohol below the cost of duty and VAT. Does that not prevent the worst excesses of cheap alcohol? Our team was commissioned by Theresa May’s Home Office to examine the potential effects of this policy before its introduction. Among other things, we reported to them and subsequently in the BMJ that 0.1% of cider units were sold for less than the cost of the duty and VAT payable and that the price increase needed to lift those sales above the threshold would be less than 0.05%. In other words, the impact on the cider market, and indeed the alcohol market as a whole, would be negligible. Nothing we have seen since the policy was introduced has altered that judgement.

Of course, alcohol taxes are not simply there to protect public health. They have historically been as much revenue raisers as behavioural interventions and provide a continual source of cheap political posturing. Nonetheless, decisions on alcohol taxes have real consequences for people’s lives and reflection is merited on a system which risks incentivising harmful practice.

My colleague, Colin Angus from the Sheffield Alcohol Research Group, posted the graph below on Twitter. It compares the beer and cider duty rates by ABV for the UK and Republic of Ireland. As you can see, the Irish system is still constrained by EU taxation rules but uses multiple tax bands to ensure that higher strength cider is taxed at a rate comparable to beer of equivalent strength. 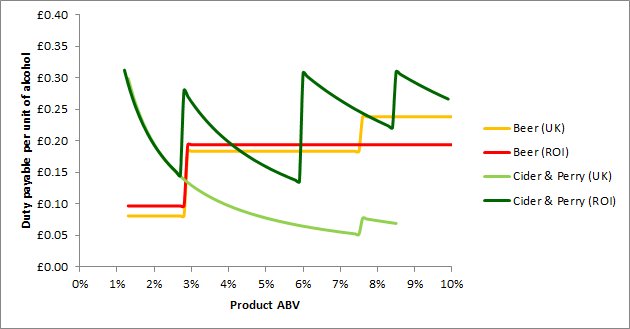