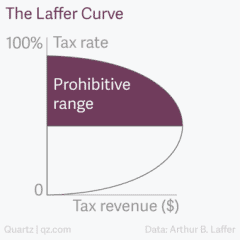 In 1974, in a Washington hotel – so the story goes – the world’s most notorious cocktail napkin got its moment to shine. The economist Art Laffer was meeting with Gerald Ford’s deputy chief of staff, Dick Cheney. Laffer drew the diagram below on a napkin:

It showed that excessively high levels of tax are counterproductive, since they disincentivise economic activity and encourage tax avoidance and evasion to such an extent that they actually reduce government revenue.

The Laffer curve, as it came to be known, had obvious appeal for the free market right. It held out the possibility that the government could cut tax rates and yet take in more money. Yet when Ronald Reagan tried to put the theory into practice, his tax cuts failed to pay for themselves, and merely led to higher government debt.

The Laffer curve is widely discredited among economists, but its enduring appeal comes from the fact that it lets those who want to cut taxes pretend that this will not hurt the public finances. So it shouldn’t really be surprising that last week’s parliamentary debate saw plenty of Laffer-inspired arguments from MPs pushing for cuts to spirits duty. “Cutting Scotch whisky duty may increase Treasury tax take, say Scottish Tory MPs”, as The Scotsman reported it.

Reference was made to the Scotch Whisky Association’s (SWA) statistic that one million fewer bottles of whisky were sold in the first six months of 2017 compared to the same period last year. This drop was blamed on the ‘increase’ (actually an adjustment for inflation) in spirits duty in the Budget in March. The flaw in this argument should be immediately obvious: the Budget occurred almost halfway through the period in question. In fact, sales did fall between April and June, but this appears to be because firms anticipated the higher rate of duty, and released more of their products early: there was a 38% spike in whisky clearances in the month prior to the Budget. It is still too early to tell how much revenue the government will take from tax on whisky this year.

Alistair Carmichael, Liberal Democrat MP for Orkney and Shetland, suggested that the Government should learn from the 2015 Budget, when:

I cannot remember exactly, but I recall that the expectation in the Government at the time was that a 2% cut would cost in the region of £600 million. That was what we thought we would lose in revenue. In fact, however, a significant increase in revenue was delivered as a result of lower taxation.

Carmichael later made clear that the ‘significant increase’ he refers to was £124 million, a figure also cited by the SWA. This is in fact the increase in revenue from spirits duty in 2015/16.

However, the notion that this increase undermines the Government’s projections is based on a misunderstanding. When the Treasury said that cutting spirits duty would cost the Government the best part of £100 million, they didn’t mean that revenue would fall, they meant that revenue would rise less quickly. This is clear from the Office for Budget Responsibility’s (OBR) forecasts for the 2015 Budget. In March 2015, the OBR predicted that revenue from spirits duty would rise from £3.1 billion to £3.2 billion: consistent with the £124 million increase that actually occurred. The implication is that without the cuts to spirits duty, the Treasury would have taken closer to £3.3 billion.

So the 2015 Budget did not disprove the Government forecasts wrong, and there is no reason to believe that cutting spirits duty would increase revenue.

The debate also heard suggestions that “the elasticities that underpin the modelling used by the Treasury are clearly out of date”. Without getting deep into the technicalities, the Government’s model would have to be very wrong indeed for duty cuts to raise revenue. For the 2% cut in duty to have increased Treasury receipts, it would have to cause consumption volume to increase by over 2% to compensate. A 2% cut in duty is likely to be reflected in price cuts of significantly less than 2%, since duty only accounts for a fraction of total selling costs, and may not be fully passed through. As a result, breakeven would imply price elasticity significantly lower than -1. A recent OECD review found that the best evidence suggests that price elasticities are typically closer to -0.5, so British whisky consumers would have to be far more price sensitive than is usually seen in the academic literature. Again, the evidence simply does not support the claims made in favour of cutting alcohol duty.

Laffer curve arguments have been used for decades by the deluded or self-serving to cut taxes. They should not be taken seriously when it comes to alcohol duty.