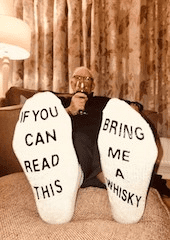 Within the United Kingdom, older people experience more alcohol-related hospitalisations and deaths than any other age group. Risky drinking amongst older people is not just confined to the United Kingdom. Potentially harmful patterns of drinking are common amongst older age groups across the globe. Older people are not only at risk because they drink more often, but also because quantities of alcohol that may have been safer earlier in life have the potential to damage an older person’s health if, like most, they have medical conditions or take medications. However, moderate drinking in older age has been linked with some health benefits, and drinking may also have a positive impact on their social lives. The impact of alcohol on older people is complex, and many different factors can influence their choices. To modify riskier drinking in later life and support people to live longer, healthier lives, it’s vital that we understand these complexities.

To examine what determines older people’s drinking, and how this might be influenced, we explored their perspectives on the topic by drawing on literature across the globe. Articles were identified systematically from databases and other sources of literature, and summarised to present views and experiences of drinking from the perspectives of older people.

Our study suggested that older people’s drinking is routine, and it can become a ritual aspect of their social and leisure lives. Alcohol may become increasingly important to an older person’s wellbeing, as other social and leisure opportunities dwindle in retirement.

Changing well-established drinking routines is a challenge, but it is important because risks are attached to even small routine excesses in alcohol use. By offering alternative social and leisure opportunities, alcohol may become less important in older people’s lives. Drinking routines can then become less cemented and more open to change.

Older people often view themselves as responsible drinkers, because they don’t drink to excess in the way younger people do. People do not typically associate drinking labelled as ‘responsible’ with possible harms to health. To promote change in riskier drinking practices, we must support people to recognise potential risks in the way they drink.

Certain patterns of drinking are likely for particular groups of older people. For example, heavier drinking is more common amongst men and in certain countries. Practitioners need to be aware of these patterns, as some are more likely to represent a health risk which should be addressed.

Older people’s alcohol intake can also be determined naturally by their access to alcohol, which may be complicated by where they live, or how mobile they are. As well as intervening with older people’s riskier drinking practices on an individual level, it is important to address factors that shape an older person’s alcohol use in their social world, culture and wider environment to support healthier drinking.

For strategies to help address riskier drinking practices amongst older people, explore the Drink Wise Age Well programme – the product of an organisation tasked with reducing harm from drinking in later life within the United Kingdom.

This article was originally posted on the British Geriatrics Society Blog on 31 May 2018.