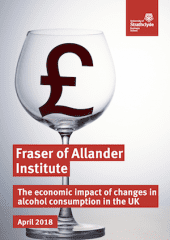 2018 is set to be a significant year for the UK alcohol industry as, after a prolonged legal battle, the Scottish Government has imposed a minimum unit price for alcohol of 50p per unit. Beyond Scotland, the policy has sparked debate on UK-wide policy with calls to develop a new UK alcohol strategy focused on reducing harmful consumption.

The purpose of this blog is to summarise the results from a recent research project on the potential macroeconomic impact of changes in UK alcohol consumption. Previous studies have tended to focus on the impact of a reduction in consumption on alcohol in isolation. However, it is likely that a shift in tastes away from alcohol – either through policy or change in consumption patterns – would result in an increase in spending on other goods and services. The full report presents a wide range of the modelled scenarios to look at this ‘net’ effect. Here we summarise just a few of them.

We first model the economic effects of a 10% reduction in alcohol spending across the UK with no reallocation of spending. As would be expected, there are large negative economy wide effects, including a reduction in UK GVA of £2.6 billion and a loss of 63,300 full time equivalent jobs.

Figure 1 shows the net effect of declining alcohol consumption on the UK economy if the money that would have been spent on alcohol is reallocated and spent on other goods and service in the same proportions as in the base year. We find an overall positive impact on GVA. There is still a reduction in employment but the magnitude is lower than if the money spent on alcohol was merely saved. Thus, there are fewer jobs, but they are higher paying and increased value added per employee.

Recent trends also indicate that, along with an overall reduction in alcohol consumption, there has been a shift away from on-trade to off-trade attributed to three main factors: the price of alcohol; social change and drink drinking limits. With the on-trade sector being much more labour intensive and the price of alcohol higher than in the off-trade, this change in tastes affects the economy. We look at the effects of a 10% (by volume) shift from on-trade to off-trade alcohol sales.

With this change in distribution channel we find (as expected) an overall negative impact on the economy, although not as large as the impacts from a 10% reduction in spending on alcohol with no reallocation to other goods and services. There is a reduction in GVA of £1.5 billion and loss of 40,000 full time equivalent jobs.

The last UK alcohol strategy (2012) identified the low price of alcohol as being one of the factors contributing to harmful consumption. With alcohol consumption being inversely related to price the simplest method to reduce consumption is to increase the price – either through a tax or minimum unit pricing. In our report we investigate the effects of a 10% increase across all UK alcohol duty rates. Similar to the 10% reduction in consumption we investigate both the ‘gross’ and ‘net’ effects (referring to the saving of additional revenues in the former case and its recycling to expand current government expenditure in the latter case) impacts from an increase in duty rates.

Focusing only on the gross impacts of this duty increase we find the results are similar to the gross impact of a reduction in consumption, with negative impacts on both GVA and employment. The magnitude, however, is much smaller than in the first scenario, since this is a smaller shock.

Even though there is a decrease in sales, government revenues increase by £789 million. If these excess revenues are reallocated to other sectors in the economy in the same proportions as in the base year, we find that there are positive net effects for both GVA (£847 million) and employment (17,000).

Written by the Fraser of Allander Institute. This article was originally posted on their website on 31 May 2018.