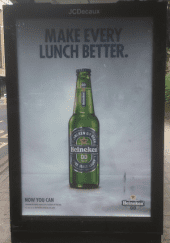 Lately, something of a phenomenon has seized the drinks industry. If the deluge of both niche and mainstream press coverage is anything to go by, alcohol-free alcohol is the new drink on everyone’s lips.

But Heineken’s decision to roll out its 0.0 lager on tap to 1,500 pubs in the UK this year may mark a genuine turning point. Alcohol-free alcohol has come a long way from the days when even comedian Billy Connolly’s tongue-twisting exploits were failing to convince consumers that Guinness’s Kaliber was anything but ‘a dull tipple when compared with the real thing’. The growing value of the market reflects this: CGA moving annual total data to 23 February 2019 shows alcohol-free beer volume sales were up 28%, values up over 29%, and non-alcoholic spirits volume and value sales for the same period rose fourfold. What’s more, the 2019 Zenith Global on European Zero Alcohol Drinks report states that in the coming years, the United Kingdom is expected to achieve the highest sales growth rate in Europe.

However, some still regard alcohol-free alcohol as ‘a waste of calories’, as one survey of young adults discovered. After all, non-alcoholic drinks already exist. They are called soft drinks. The world’s most valuable drinks company is known as a soft drinks brand. So, is there really a sustainable demand for a product that simultaneously retains the flavour, taste and look of alcohol whilst avoiding the unique ill effects that it can cause?

Perhaps. Non-alcoholic drinks are often promoted on the premise that they are healthier than alcoholic ones, with reports claiming that younger drinkers in particular are leading the way in a low / no alcohol revolution based on their health-conscious, body-conscious lifestyles.

But is the alcohol industry encouraging a shift to lower strength drinks for this reason? The Behaviour and Research Health Unit suspects not. They found that lower strength products (including alcohol-free ones) were seen as targeting non-traditional consumers (pregnant women) and occasions (weekday lunchtimes), suggesting ‘these products may be perceived as extensions to regular strength alcoholic drinks rather than as substitutes for them’.

If this is the case, then the proliferation of alcohol-free alcohol may belie a more pragmatic motive: To offset a long-term downturn in global alcohol consumption. Marketing agency European Field Marketing Partners Ltd note that since the turn of this century, several high-income countries, namely the UK, Spain, Italy, Ireland, Switzerland, Denmark, Belgium and France, have seen per person alcohol consumption fall. More recently, year-on-year International Wine and Spirits Record (IWSR) figures show that the global market shrank in 2016 (-1.3%), stagnated in 2017 (+0.01%), before contracting again in 2018 (-1.6%).

Some major alcohol producers have responded to this trend by premiumising product ranges – meaning customers spend more on the same amount of alcohol in a product of a higher quality – while relying on heavy drinkers consuming lower quality products to maintain healthy profit margins for their shareholders.

But this is seemingly not enough for Heineken UK Managing Director David Forde, who – in the competition for drinkers’ thirst – views every drinks manufacturer as a threat to Heineken’s bottom line, including soft drinks brands. Forde has stated Heineken 0.0 ‘can go on the offensive and go after Coke, go after Fanta, go after spring water, go after tea, go after coffee’.

And this attitude may have spooked soft drinks manufacturers into doing battle. In Britain, Irn-Bru makers AG Barr have made their first foray into the alcohol-free alcohol market by snapping up a 20% minority stake in non-alcoholic spirit Stryyk, and even Coca-Cola have ceded ground to Forde’s agenda with the release of a mocktail range. Perhaps they thought, as did Diageo when they began investing in zero-alcohol ventures such as Seedlip, that selling products such as non-alcoholic spirits at spirits prices – without paying any duty – was a great business to be in.

However, a more insidious side-effect of this particular dash for drinkers’ thirst may be the creeping normalisation of alcohol brands as the go-to drinks for all occasions. For instance, the current Heineken 0.0 campaign features an ad that shows people drinking at work and in the driving seat of a car. This is presented as a playful kiss-off to those who ever doubted alcohol brands could exist in such spaces, but it is also a very real aim for Heineken, whose MD has said ‘there is no limit’ to when you can drink it: ‘If you think about all the occasions that people drink a soft drink today – we can be in that market.’

Making predictions is usually a mug’s game, but taking Forde’s vision to its logical conclusion, don’t be surprised if adverts showcasing an alcohol brand as having the perfect drink type for all the family – children included – or over the course of an individual’s life, popped up one festive holiday in the near future.

By then, alcohol producers will no doubt have the cradle-to-grave coverage they crave. But can they be trusted to advertise alcohol-free alcohol responsibly? Wine industry worker Mark Fidler thinks not. Fidler expressed his unease at a post on his Facebook feed advertising the sale of alcohol-free beer Asahi Dry Zero via the account of New Zealand based online retailer Mighty Ape.

He said: ‘I was surprised to see a product like that there. I mean it specialises in games, toys and books. They’re aiming at children and teenagers mostly’. Fidler also believed that Mighty Ape marketed the product as if it were an alcoholic beverage, complaining that ‘from the “moral” side of things it was irresponsible’ for them to do so.

In response, Mighty Ape Chief Marketing Officer Gracie MacKinlay admitted that although there were no licensing issues around selling the zero-alcohol beer, it was ‘not a product that we would market to children’. But, as Alcohol Healthwatch Executive Director Dr Nicki Jackson pointed out, the identical branding of both alcoholic and alcohol-free beers raises concerns that such exposure to children would lead to an ‘earlier onset of drinking and heavier drinking in young people’. Dr Jackson’s concerns are worthy of research into the nature of such an association.

Until then, a country that wishes to halt this morally irresponsible marketing practice could always forbid the promotion of any products ‘carrying the same brand or distinctive mark as beverages containing more than 2.5% alcohol by volume’, like Chapter 9 of Norway’s 1989 Alcohol Act.

Either way, countries that wait for the drinks manufacturers to do the right thing risk slipping into a marketing environment so toxic that even an alcohol-free childhood is not free from the influence of alcohol.

Written by Habib Kadiri, research & information officer at The Institute of Alcohol Studies.