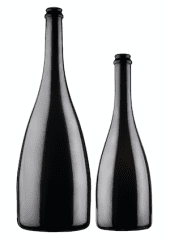 Like many, you might enjoy a glass of wine at home in the evening. You probably buy your wine from a supermarket. You might choose a red or a white, a Chardonnay, or a Pinot Grigio, a Merlot or a Rioja, from France or Spain, Italy or New Zealand. But whatever you choose, it will more than likely come in one size – the 75cl bottle.

Unlike almost every other product on supermarket shelves, the vast majority of wine comes in only one size. Aside from the interesting question of why this bottle size is near universal – another question we ask is whether the size of a bottle affects how much we drink. Would smaller bottles reduce how much we drink – or might it increase the amount? Either way, how small would we have to go for bottles to have an effect?

The larger the portion or package, the more people eat. Based on the results of a review of 69 experiments on food and non-alcoholic drinks, we estimated that if every time an adult in the UK encountered food, it was a standard – rather than larger – portion or package, this would reduce the number of calories consumed by between 12% and 16% per day. A huge effect. At the time of this review in 2015, no studies had experimentally altered size in relation to alcohol – the size of glasses, servings, cans or bottles. A few studies have now looked at the impact of glass size and serving size on how much alcohol people consume. But still no studies have examined the impact of the size of containers – cans, boxes or bottles.

Would smaller wine bottles reduce how much we drink? The answer might seem intuitive: with less in a smaller bottle, there is less at hand to drink, so less will be drunk. This assumes that people will stop at one bottle. What happens if the amount in a smaller bottle is not considered enough and a second bottle is opened? Will people end up drinking more than they otherwise would have? Or what if smaller bottles encourage people to open a bottle in situations where they probably wouldn’t have?

In the first study to address these questions, we recruited 186 households that regularly consumed wine. During the first of two 14-day study periods, households were randomised to buy their usual amount of wine in either standard 75cl bottles or smaller 50cl bottles. They then purchased the same amount of wine in the alternative bottle size in the second 14-day study period. Households sent photographs of their bottles so volume and rate of consumption could be assessed. Based on the results from 166 households that completed the study, drinking from 50cl bottles – compared with 75cl bottles – reduced the amount of wine drunk by 4.5%. It also slowed down the speed of consumption by almost 6%.

Why might smaller bottles help people drink less wine at home? There are various possible explanations. It might be that finishing a bottle signals to people that they should stop drinking. So, with less wine in smaller bottles, less is drunk. Also, when drinking from smaller bottles, additional intake arguably requires more effort – the effort of opening a second or third bottle. But not all smaller bottles might work in the same way. In our study, we used 50cl bottles, two thirds the size of a standard 75cl bottle. As such, they might have been large enough to count as a bottle of wine. But what about half bottles? The results of a small pilot study, which compared how drinkers respond to 75cl and 37.5cl bottles, highlighted the possibility that the amount held in the smaller bottles might be considered too small, potentially making people drink more. But this remains to be tested further.

The extent to which smaller bottles influence how much wine people drink is also likely to depend on the size of the glass they drink from. Larger wine glasses increase wine sales in restaurants but not bars. More wine is sold by the bottle in restaurants, with bottles allowing free pouring of wine, leading to more generous servings with larger glasses. We also know that the size of wine glasses has dramatically increased over the last three decades. It, therefore, seems likely that the households in our study were using glasses that maximised rather than minimised their consumption. Had all households used smaller wine glasses, we might have seen even less being drunk with the smaller bottles. The combined influence of both bottle size and glass size on how much people drink also remains to be tested.

Increasing the price, reducing the availability and restricting the marketing of alcohol remain the three most effective ways of reducing alcohol consumption across populations. The results of this study suggest that reducing the size of containers in which it is sold could add a further measure to help people drink less at home, where most wine is drunk, and tackle one of the leading causes of premature death worldwide. Given many of the wine drinking nations across the world are staying at home in response to the COVID-19 pandemic, drinking at home is likely to be on the increase. Perhaps this a vital time to introduce measures – such as using 50cl wine bottles – to keep our drinking in check. 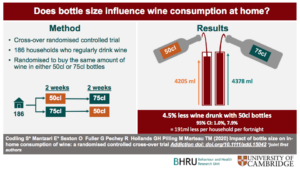