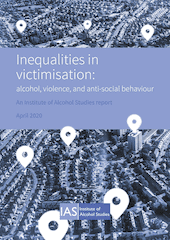 Of the 1.4 million violent incidents reported in England and Wales last year, two of every five (39%) were alcohol-related. I published findings through the Institute of Alcohol Studies that suggest the burden of this violence falls heavier on some than others.

Using five years’ worth of data from the Crime Survey for England and Wales, alcohol-related violence victimisation – violence where the victim believes the perpetrator was under the influence of alcohol – was found to be disproportionately clustered in the lowest socioeconomic groups. To understand this pattern, different types of alcohol-related violence were disaggregated, which revealed this inequality was driven by alcohol-related domestic and acquaintance violence. When compared to the most advantaged groups, up to five times as many people in the most disadvantaged groups had experienced alcohol-related domestic violence, and these groups experienced as many as 14 times the number of incidents per 1000 people, suggesting startling rates of repeat victimisation.

These findings are both shocking and, sadly, unsurprising. Not only has research repeatedly shown those from the least advantaged groups to be at higher risk of violent victimisation overall, but also to have higher levels of alcohol-related mortality and ill health, despite drinking less on average. However this study was one of the first to investigate inequalities in alcohol-related violence and its subtypes. I’m currently working with partners to understand how other risk factors for violence might be involved in these patterns, but one thing is already clear – policy action is required.

First, access to publicly funded domestic violence services must be urgently improved. Data have shown that the severe cuts these suffered during austerity affected women in lower socioeconomic groups to a much greater degree than their more advantaged counterparts, reducing their ‘propensity…to escape violence‘. It is both concerning that services may be lost altogether, or that services continue to operate without sufficient funding to provide a duty of care to clients, as US research has demonstrated that services open but damaged by budget cuts can also put people at risk.

Second, while no-one would argue alcohol to be the sole cause of the violence described here, it can be considered a contributory factor. There is a wealth of evidence to suggest that increasing the price of alcohol reduces population wide levels of violence. A policy of minimum unit pricing has been both demonstrated to reduce crime, and – as has been found regarding health harms – modelled to disproportionately benefit the lowest socioeconomic groups experiencing this violence through reducing alcohol’s affordability. Instead recent interventions have had the opposite impact on affordability; modelling has estimated that ‘the UK Government’s decision in 2012/13 to abolish the alcohol duty escalator and its subsequent cuts and freezes in alcohol duty’ led to ‘an additional 111,063 additional alcohol-related criminal offences in England’ including violent crime, between 2012 and 2019.

Similarly, the physical and temporal availability of alcohol has been linked to levels of violence – with domestic violence specifically linked to off-sales premises. With this in mind, restrictions on off-sales specifically might have the greatest effect on the domestic violence disparity identified. For example, restrictions on the hours of sales have been demonstrated to reduce violence levels – ‘lock-out’ laws introduced in New South Wales, reducing the terminal hours of sales in city centre bars saw facial injuries arising from assaults fall by 60% within two years. Similar closing time restrictions could be trialled for off-sales premises.

Finally, while I whole-heartedly support the policy interventions that I’ve laid out here, I am under no illusion that without significant structural change they can only ever limit – not eliminate – this disparity. For example, recent research examining the impact of alcohol pricing interventions on children of parents or carers drinking at harmful levels in Scotland illustrates this, with author Jane Ford of Public Health Scotland noting that ‘the negative impacts of poverty and recent changes to the welfare system were more likely to affect the families…’. As such, we must look for opportunities to work across sectors to reduce the damaging impacts of social inequality.

This work has taken on new urgency in recent weeks. During COVID-19 lockdown, reports of domestic violence have risen dramatically, our national alcohol consumption and drinking patterns have changed, and we have become all too familiar with the intensely harmful effects of inequality. The sharp rise in home drinking is particularly concerning given the links researchers have established between off-sales availability and domestic violence specifically. This means the interventions laid out here have become all the more pressing. Policymakers should consider these as a matter of urgency, incorporating them into COVID-19 response plans, and maintaining them long beyond.